Bumps In the RoadNepal / India

One Night in Bharatpur

I was a horror movie junkie as a teenager. The more screams the better. I don’t think there are many from the late 70s and early 80s that I didn’t see in real time. Like most of my fellow audience members, I would cheerfully yell at the screen when the actors did something dumb…  like hide in the basement from the axe wielding maniac or go back into the haunted house.

So I guess it’s not hard to imagine what was running through my mind when the last plane out of the Bharatpur airport was cancelled and the four of us – Tom and Bernie Frasier and Michelle and Bob Fish – were stranded in a very rural part of Nepal after dark with nowhere to go and no one to help us. Are those banjoes I hear in the distance? 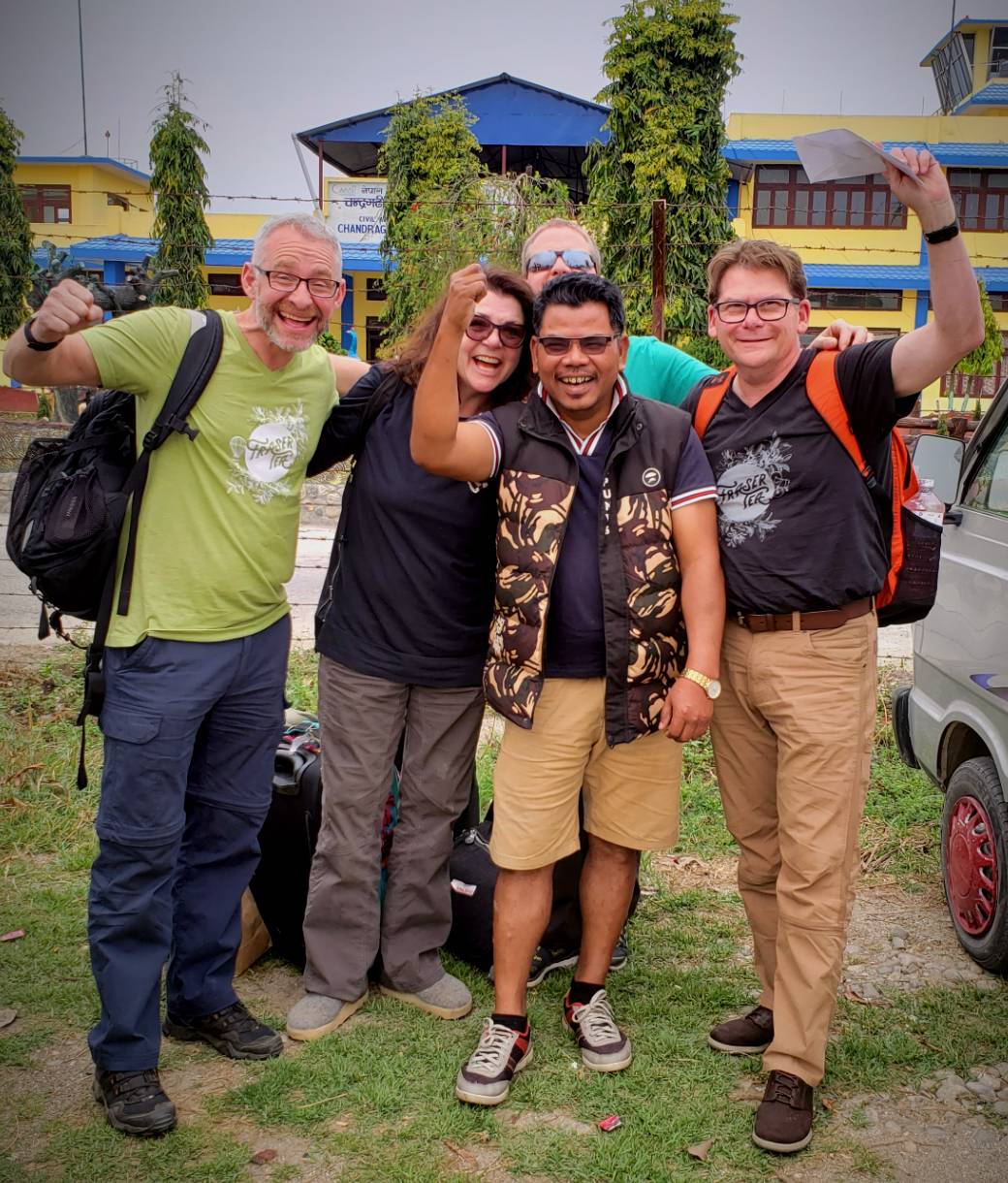 Getting to the Bharatpur airport was an adventure in itself, and we were pretty happy to get there… not knowing what would come next.

We were in Bharatpur on our way back from Darjeeling to Kathmandu. It had already been a long, hot, dusty day of travel, starting with a four-hour heart-in-your-throat car ride down the narrow switchback roads of the Himalayan foothills. We crossed the border into Nepal from India, which is an otherworldly experience unto itself (READ: Crossing Over), and arrived at the airport – really a shed in a field with a few benches – about five hours before our scheduled flight on Yeti airlines. We had snacks, thanks to the wonderful people at the Glenburn Tea Estate we had just left. We had bottled water. And we had backup batteries for our cell phones. So we passed the time sweating and eating and listening to tunes. 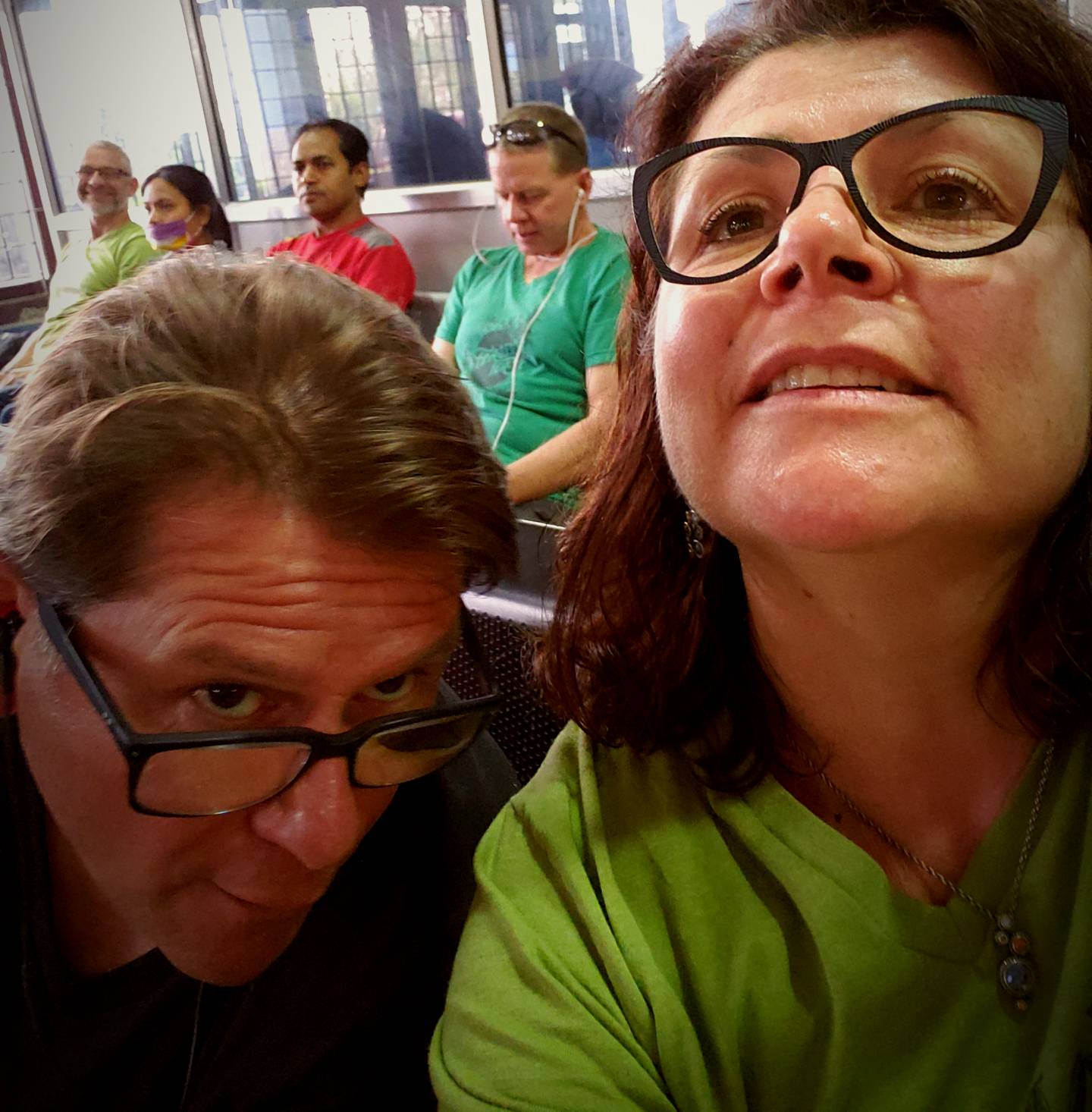 The first signs of trouble came from the passengers arriving from Kathmandu… there were strong thunderstorms building and they were threatening to get worse. Several people were talking about how bumpy and frightening their flight in had been. We were delayed an hour, and then another hour. A rival airline sent a plane up in the air to Kathmandu, only to have it turn around and come back an hour later.

So now it’s well after dark, hours after we were scheduled to take off, and all flights are cancelled.  The airport is packed with the passengers from two full flights, everyone yelling and jostling to get their luggage back. Most of our fellow passengers had a place to go. We did not. Bernie was trying to reach our Nepalese friend, Nischal Banskota by phone, but not having much luck. We were all looking at each other like “now what?”

In my mind, I could hear the audience yelling at the screen. No way, I thought. Not with you, not tonight.

But we didn’t have a lot of options. In fact, we didn’t have any options. The airport staff were all gone by this point, and the number of people still at the airport was dwindling. So we all took a deep breath and agreed to let him take us to his hotel. We loaded into two separate tuk tuks (“he’s separating us to make us easier to take out” the voice in my head whispers, “SHHHHHH!” I answer back).  He tells us that it’s just a kilometer away, but we are bumping down the road for what seemed like miles, getting further and further away from any streetlights. Bob is gripping my hand, and I am doing deep yoga breaths, conjuring up a list of all the things in life that I’m grateful for and picturing the faces of people I love. 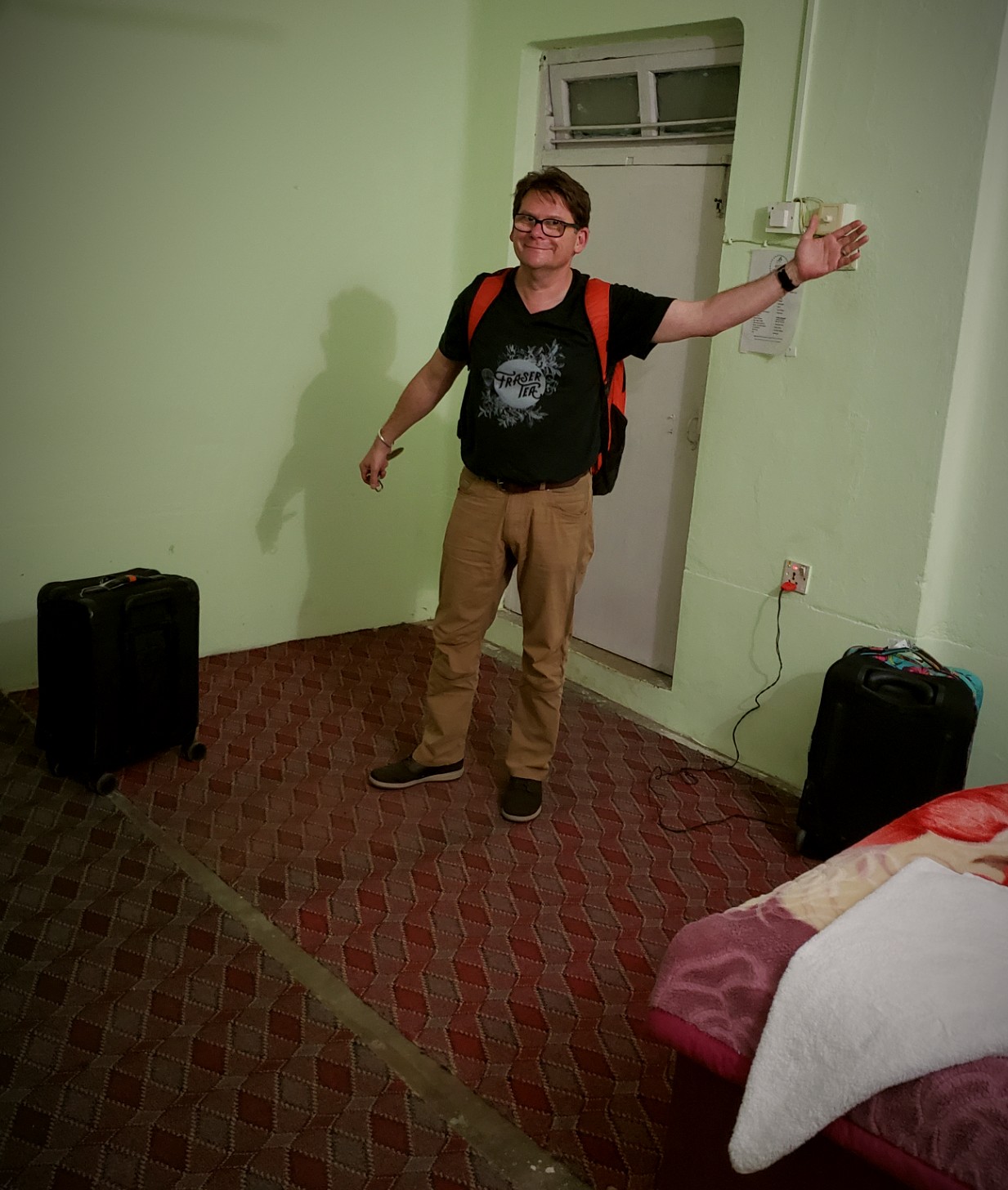 At last, like an oasis in the desert, the hotel appears all lit up on the horizon. We unload from the tuk tuk, and our host tells us that because Bob and I are married, we get the best room. He leads us up the stairs to a door with a padlock on it (you use the padlock on the inside to lock the world out when you’re in the room… let’s hope there isn’t a fire), and he lets us in.  It’s hot, there’s a window with bars on it, but no screen, and the mosquitos are large, plentiful and happy to see us.  But there’s a bed, and a bathroom, and we are still alive. They shut the power off to the hotel shortly after we got there. We brushed our teeth in the dark with our bottled water. I don’t think either of us slept much that night. But I was grateful that we had a place to be. 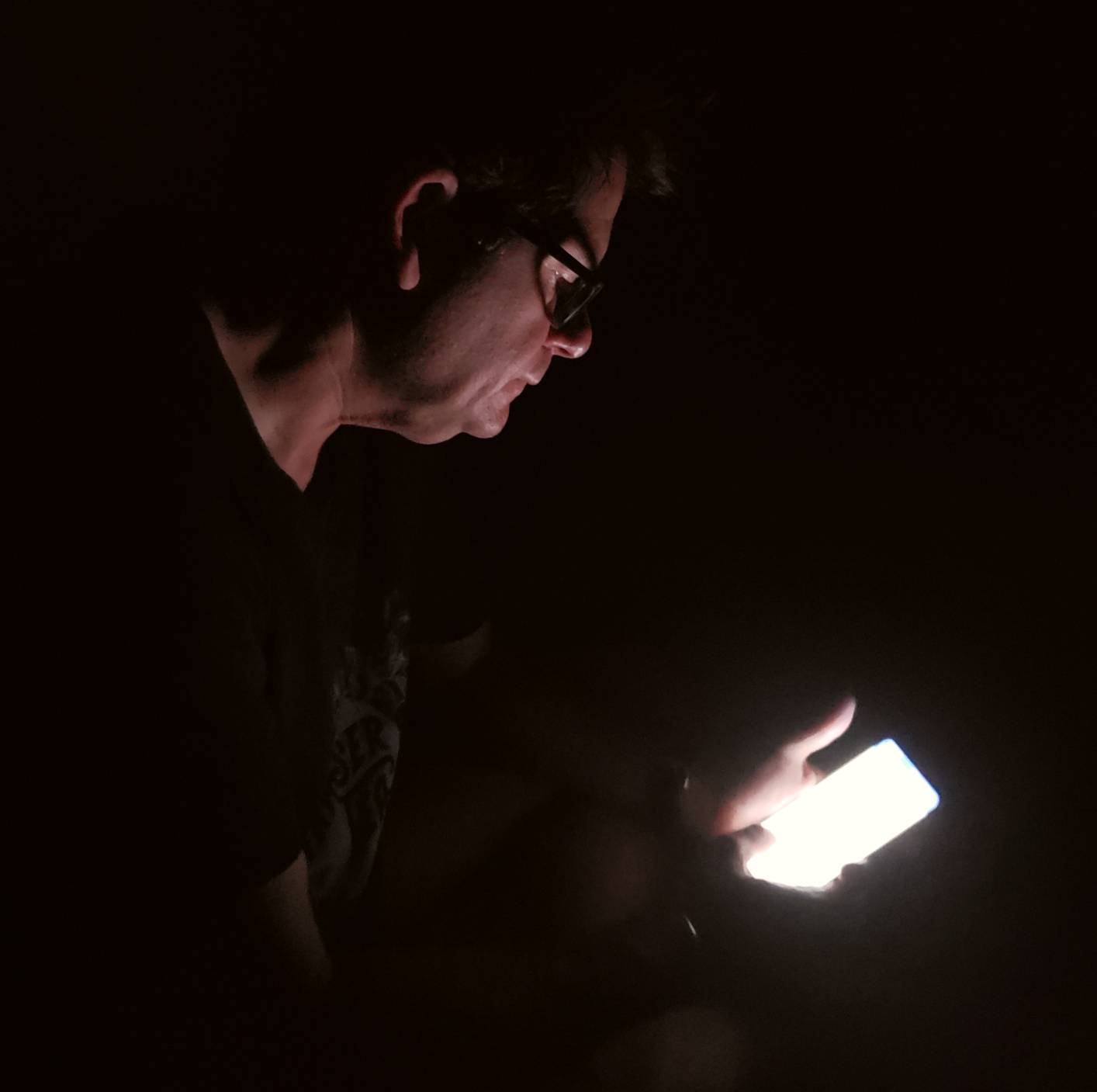 A few things that we didn’t know… those storms that night were deadly. They swept across southern Nepal killing 28 people and injuring hundreds more. They included the very first recorded tornado in Nepal. We were very fortunate not to be flying through them.

Also, Bernie’s calls to Nischal were not unheeded. Nischal had gotten our messages and made arrangements on our behalf… with the guy that approached us in the airport. That is exactly why he was so persistent. We were in the best, safest hands the whole time. We just didn’t know it.

That’s the thing about fear. It can distort the reality of what is actually happening so that all you see are the shadows. It is, of course, always a good idea to be aware of your surroundings and careful not to put yourself in harm’s way. But we had met some wonderful people in Nepal. All of my experiences there were of warmth and friendship. When the unknown unexpectedly smacked us in the head, my response was to be afraid. That’s something I need to work on. 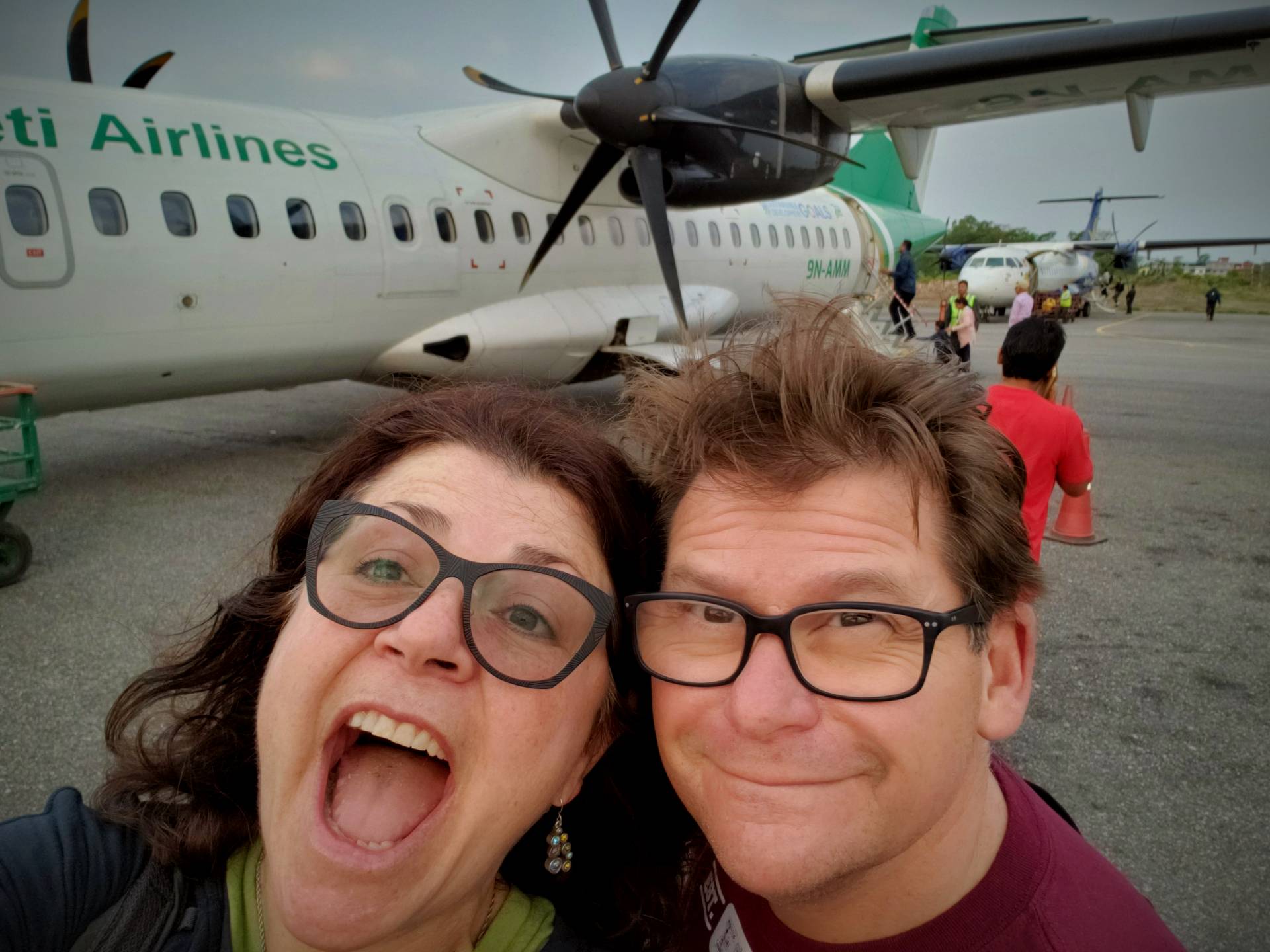 Very early the next morning, we were tuk tuked to the airport, and hopped on the plane back to Kathmandu.  I don’t think I’ve ever been happier to board.